Fossil Gen 5 is easily the best Wear OS smartwatch you can buy at the moment, and as long as you don’t expect it to be an Apple Watch-beater, it gets the job done and looks the part. 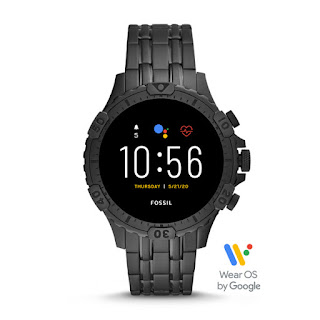 Smartwatches that run Google’s Wear OS software have come in many different designs from various different manufacturers, and work with both Android and the iPhone. But they have long been plagued by sluggishness, poor battery life and a software experience that is behind the competition.

Fossil Group, which includes the signature Fossil brand and many others such as Michael Kors, Diesel, Misfit and Skagen, has been making the best of Wear OS, but often that simply hasn’t been good enough.

Fossil’s fifth-generation smartwatch, the Gen 5, is important for the whole of Wear OS, as its internal workings will also form the basis of all of Fossil Group’s various smartwatches this year.

The Gen 5 is a good-looking watch in its own right, with various different colours, finishes and straps available. It doesn’t immediately scream that it’s a piece of technology, which is a good thing.

At 12mm thick and 44mm wide the watch isn’t small, but it looks fairly slim, easily fits under a shirt cuff and doesn’t look out of place on relatively small wrists. 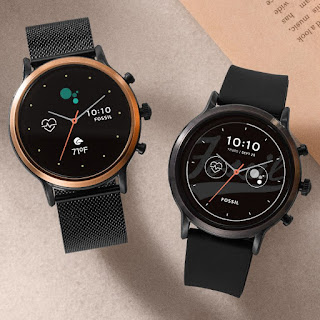 The 1.28in AMOLED screen is crisp, clear and bright enough to see in direct sunlight with automatic adjustment. It’s on all the time by default so you can see the time and notifications at a glance.

Fossil provides loads of highly customisable watch faces, most of which look really good, plus there are hundreds more on the Play Store. There’s a speaker hole in one side of the watch with two buttons that launch your choice of apps and one rotating crown on the other.

As a watch, then, it ticks most boxes.

The 44mm case size is a nice balance between big and small watches, but some may prefer something narrower. Photograph: Samuel Gibbs/The Guardian

The magnetic charging puck uses pogo pins, instead of wireless charging as used by other popular smartwatches, and charges the watch relatively fast.

The Gen 5 manages to banish the issues of poor performance and battery life of Wear OS to the past. Performance is good, if not quite on par with the Apple Watch Series 5, with no noticeable lag or dip in speed in general usage, helped by the 1GB of RAM and newer Snapdragon Wear 3100 processor. 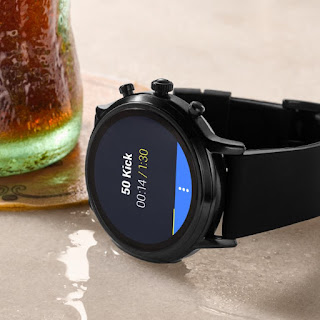 Battery life is also improved, lasting at least a day with the “Daily” mode activated, which turns on all the functions. Put on my wrist at 7am with background heart rate monitoring, the Gen 5 ends the day at 11pm with at least 25% battery left – a marked improvement over most Wear OS watches that struggle to make it through a full day.
The “Extended” battery mode, which turns off some of the features including the always-on screen, lasts more than two days between charges, while time-only mode lasts much longer still.

Charging takes just over an hour via the small white magnetic USB puck that attaches to a ring to the back.

It’s worth noting that while the watch comes with a two-year warranty, Fossil said the battery cannot be replaced, meaning the watch is ultimately disposable.

Swipe over to the various Tiles for widgets such as timers and health tracking.

Wear OS has improved over the last year, but simply isn’t as feature-complete or as slick as Apple’s watchOS or Samsung’s Tizen on their respective watches.

You navigate via swipes on the screen. Left to right for Google Assistant. Right to left for various widgets for things such as timers, Google Fit and others called Tiles. Swipe up from the bottom for notifications and other bits. Swipe down from the top for quick settings, such as airplane mode, volume, battery modes and Google Pay. Long-press on the watch face to change it.

Press the crown in to access a list of apps or go back to the watch face. Swipe from left to right typically works as the back button on Android. It’s fairly simple and easy to get the hang of.

The list of apps is easy to zip through to find the one you want, but you can also pin favourites to the top for quick access or set them to launch when you press one of the buttons.


Notification handling is where Wear OS shines. Notifications pop up from the bottom and can be dismissed, expanded to read the text of emails or WhatsApps, or actioned with the same options as available via the notification shade on your phone such as archiving with Gmail or similar.
You can reply to messages using smart canned responses, your voice to transcribe, or with the surprisingly good keyboard which, while fiddly, gets the job done for quick things even if you’re a bit fat-fingered.

Media controls are also great. Start playing something on your phone and they pop up on the watch to skip track or change the volume using the crown. There’s a dedicated Spotify app too, but it won’t allow you to store music offline – for that you have to resort to Google’s Play Music app.

Popular third-party apps such as Strava and Citymapper are available through the store, while Google’s services are well catered for with Maps, Translate, Fit and others available.

Google Assistant works well on the watch, as long as you have a good connection to your phone for internet access.

Long-press on the crown or a swipe from left to right on the watch face to get to Google Assistant, which will set timers, alarms, reminders and answer questions via voice straight from the watch using the built-in speaker and information on the screen. It works well, as long as you have a connection to your phone.

Wear OS on the Gen 5 is the best it ever has been. But it’s certainly not a perfect experience. The setup process failed once on one of the watches, requiring a reset and starting again. Occasionally the watch disconnects from the phone and the only way to get it working again is to reboot it.

The rotating crown scrolls in apps and settings, except when it doesn’t. Some apps such as Spotify refuse input from the crown, others such as face editing settings or Google Fit only work sometimes. It’s unpredictable enough that you just resort to swiping on the screen instead by default. The list of little niggles goes on. They’re not deal breakers, but each is annoying.

It’s also worth noting that Fossil also will not commit to a set length of software support for the Gen 5.

The heart rate monitor in the back works well, but Google Fit lacks more advanced health data and analysis.

The biggest area of weakness in Wear OS is its built-in health tracking related functionality or lack thereof. Google Fit is the main app here. It can count your steps, movement minutes and “heart points” just fine, it monitors your heart rate in the background occasionally, and will guide you through breathing to destress.
But the Fit app doesn’t do much beyond the basics, not even sleep monitoring. It can track a lot of workouts, but the screens it displays for things such as running aren’t customisable. Using it for tracking workouts also affects battery life, particularly if you’re playing music to Bluetooth headphones while running.

Third-party fitness apps such as Strava, which is simple but effective, may fill the gap for specific functions. Nike Run Club and Cardiogram also come pre-installed.

Overall, Google is miles behind both Apple and Samsung, let alone the likes of Fitbit or Garmin, in features and polish on health tracking and analysis, and Wear OS suffers as a result.

The bands are standard quick-release pin 22mm straps so you can easily swap them, although the black silicone is of high quality.

Google Pay works great on the watch and supports most UK and US banks.

You can take calls on your watch.

The Gen 5 works with iOS with most of the same functionality except a lack of Siri and iMessage support.


The Fossil Gen 5 is easily the best Wear OS watch available and bodes well for the rest of the brands within Fossil Group’s roster.

It relegates problems with performance and sub-day battery life to the past, and looks good doing it. If you want your smartwatch to look like a more traditional timepiece the Fossil is great.
But Wear OS just isn’t as polished or feature-packed as rivals from Apple and Samsung. Use the Gen 5 as a basic smartwatch with excellent notification handling and music controls and you’ll be happy. Try to get comprehensive health tracking and advanced features and you might struggle.

Will it beat an Apple Watch Series 5? Not a chance. But one of the Gen 5’s biggest strengths is that it isn’t an Apple Watch so you’re not going to see every person in the room wearing the same watch as you. It’s also at least £120 cheaper.

If you want a good-looking smartwatch that doesn’t follow the crowd and ticks enough boxes to be a replacement for a traditional digital or analogue timepiece, then the Fossil Gen 5 in its various guises is worth considering. Particularly on a deal.

looks like a watch, not as common as an Apple Watch, works with both Android and iOS, good notification and music controls, Google Pay, speaker, 30-metre water resistance, at least one day’s battery, third-party app support, standard 22mm straps.

Fossil provides loads of watchfaces with most customisable in elements and colours, but there are hundreds more available in the Play Store.