Trending Techs HD 9:42 AM
XRSpace is aiming to revolutionize the virtual reality space this year with its new state of the art self-contained VR headset, which harnesses the power of 5G. Introducing the XRSpace Mova.
Speaking at the XRSpace global announcement event, former HTC head Peter Chou explained that he believes smartphones are limited in the way the devices allow humans to interact with one another. Emojis, pictures, text and even video aren’t enough to capture how we truly feel. So Chou set out to create a social reality where people can interact physically and virtually, in a way that is more similar to normal human interactions. 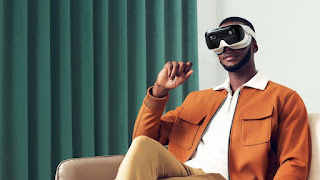 Chou also touched on the problems with VR in general, claiming that most regular consumers haven’t tried VR due to the many barriers that are preventing widespread adoption. He believes that people think the technology is gimmicky, complicated and that the perception is that VR is only relevant to gamers and B2B applications.
The best business VR headset 2020
XRSpace hopes to solve these issues by making VR a more day-to-day experience, much like how we use our phones. With this in mind, the $599 XRSpace Mova VR headset (about £480/AU$890) was designed to be small, light and powerful with a Qualcomm Snapdragon 845 inside.
It has a refresh rate of 90Hz to help reduce dizziness and users can use their hands to navigate, a rare occurrence in the VR space. With no controller necessary, the XRSpace Mova headset lets users virtually handshake, high-five and play basketball. It picks up the same types of hand gestures you’d use in the real world, so should be very intuitive.
A virtual playground
XRSpace Manova(Image credit: XRSpace)
Taking a page from the film Ready Player One, Mova will also support an exclusive virtual world that reminds us of Sony’s failed social experiment, PlayStation Home. The space known as ‘Manova’ will feature all sorts of public and private locations for users to explore, such as a cinema where you can watch films. There will also be fitness classes, a place to meet friends and plenty of commercial opportunities for companies to take advantage of, such as Rovia's Angry Birds VR game.
In Manova, consumers will embody virtual avatars, which can be made by simply taking a selfie. You can then customize your avatar's appearance, although they’re not exactly the most original-looking design we’ve seen.
Noticeably, we never saw a live demonstration of the headset in action. Instead, the audience was treated to a number of videos that merely seemed like concept trailers and a lot of grand promises. Of course, that doesn’t mean that the XRSpace headset won’t deliver when it launches in the third quarter of 2020, but it’s best to remain skeptical for now.